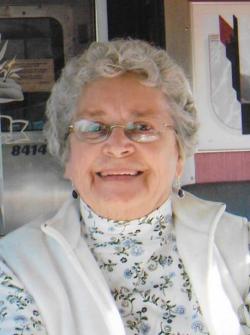 *Update: The funeral service will be held on Saturday, August 17, 2019 at the Dawson Settlement Church at 11:00am

It is with great sadness that we announce the passing of Lois Irving on March 2, 2019.

She was born on May 21, 1932 in Dawson Settlement, NB. She was the daughter of the late Audber and Helen (Newcomb) Jonah.

After graduating from high school in Hillsborough, NB., Lois was employed at the T. Eaton Co. until 1952, when she married her best friend, William (Bill) Irving. Lois began a life of travelling with Bill for the next 26 years as he served with the RCAF. They lived in several Canadian Provinces and Germany with three sons.

They retired to Berwick, NS. Lois was active in the Food Bank and the Baptist Church, later they moved to Stony Plain, AB.

Lois is survived by her sons; Steven of NS, Gordon (Nancy) of BC and her daughter-in-law Val of AB. She is also survived by her sister Dora Cornford of Saint John, her brother Herman (Betty) Jonah of Dawson Settlement, five grandchildren, four great-grandchildren and several nieces and nephews.

In keeping with her wishes, there will be no visitation. A funeral service will be held at a later date this spring with interment to follow in the Jonah Cemetery.

Arrangements are entrusted to Cobb’s Funeral Home and Cremation Center ,330 Whitepine Rd., Riverview (869-2007). Donations made to a memorial of the donor’s choice would be greatly appreciated by the family.