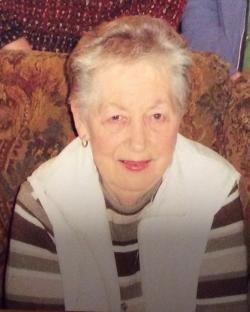 It is with great sadness the family announces the peaceful passing of Ruth Steeves, November 28, 2019 at the Forestdale Nursing Home.

Ruth was born at home on the family farm in Marie-de-Kent, daughter to the late Elizabeth Irene (Stiles) Ward and William Thomas Ward.  After moving to Moncton as a teenager, Ruth worked at Ned’s Convenience Store and T. Eaton Company Ltd.  Ruth had exemplary sewing skills and while working at Eaton’s they sent her to Gander, Nfld for a period of time to work in their sewing department.  She was a stay-at-home mom for many years, devoting her time and energy to raising her family.  After the children were grown she did homecare and worked at the Metropolitan Store in Moncton.  She was a very social woman who loved to have people visit and serve them a cup of tea with a sweet or a piece of her delicious homemade bread.

By her request there will be no visitation or funeral service.  Interment at Green Hill Cemetery at a later date.

Donations in Ruth’s memory may be made to the Hillsborough Baptist Church.  The funeral arrangements are entrusted to Cobb’s Funeral Home and Cremation Center, 330 Whitepine Road,  Riverview  (869-2007)  Online condolences may be expressed at www.cobbsfuneralhome.ca