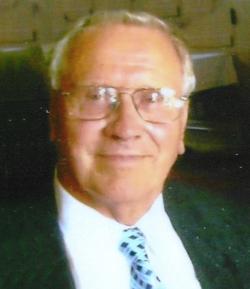 It is with great sadness we announce the passing, in his ninetieth year, of George Toogood, loving husband of Alma (nee Russell) which occurred on Sunday, January 12, 2020. Alma predeceased him eight months ago. He will be greatly missed by his children Jim (Karyn), Debbie, Ron (Anita) and Rob (Kellie), his twelve grandchildren – Becky, Kyla, Justin, Caroline, Jamey, Allison, Andrew, Matt, John, Brad, Katherine and Nick, and his great-grandchildren, Adelyn, Gwen and Bridget.

George arrived in Moncton in the late 1940’s. He began to work during the day and studied business courses in the evening. It wasn’t long before he opened his first business, WG Toogood Auto Sales.  George could see an opportunity where others would not, and soon this business was followed by many more. He was particularly active between the 1950’s into the 1980’s, not only opening a number of auto dealerships, but becoming involved in other businesses, in Moncton, and in other Maritime centers. In the late 1950’s he started developing real estate; constructing a number of apartment buildings, a business that remains family owned and continues to grow. In the mid 1980’s he was instrumental in directing his family into the hotel business, today operating four Coastal Inns in Nova Scotia and New Brunswick. George loved his work and enjoyed nothing better than the breaking ground of a new building.

Throughout his life, George believed in reinvesting in his community through business initiatives and support to local charities.

Above all else, George was a family man. Despite his strong work ethic (well into his eighties) he always saved Sundays for time with the family. A favourite escape was summers at the cottage and time in his garden. Later in life he and Alma enjoyed time in Florida.

The family invites you to join them at Cobb’s Funeral Home and Cremation Center, 330 Whitepine Road, Riverview (869-2007), for a time of visitation and sharing of memories on Wednesday, January 15, 2020 from 4-8 PM. A private burial will take place at a later date. For those who wish, a memorial donation to The Friends of The Moncton Hospital (Friends@HorizonNB.ca) or a charity of choice would be greatly appreciated by the family. Online condolences can be expressed at www.cobbsfuneralhome.ca