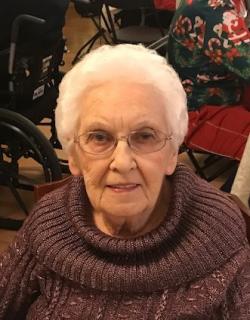 Joan Fanjoy, formerly of Whites Cove, passed away at The Moncton Hospital on Tuesday, January 14, 2020. Born in Jemseg, NB she was the daughter of the late Frances and Emma (Roland) Turner.

Aside from her parents, Joan was predeceased by her husband Garnet Fanjoy, sister Jean Maxon and her brothers, Douglas Turner and Malcolm Turner.

In keeping with her wishes, there are no visitation or funeral services. Arrangements are entrusted to Cobb’s Funeral Home and Cremation Center, 330 Whitepine Rd., Riverview, (869-2007).

In lieu of flowers, donations may be made to Alzheimer’s Society or a charity of the donor’s choice.

A special thank you to the staff of Monarch Hall (second floor) and the nurses and doctors of The Moncton Hospital for the care and compassion she received during her stay.

Burial Location
Jemseg Cemetery at a later date
Requested Charity
Alzheimer’s Society or a charity of the donor’s choice.