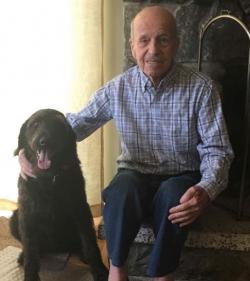 Bill, an 18-year resident of Riverview and formerly of Toronto, passed away at The Moncton Hospital on Saturday. Born in Shediac, he was the son of the late Joseph and Emilie (Martin) Wade.

Proceeded by his daughter Elizabeth (Liz) Wade, (Brad Smith) and his brothers Rene, Eloi, Henry, Joseph and his sisters Mary and Eva.  He will forever live in the hearts of his daughter, Wendy Cortese (Dany Richard), son Tim (Rosemary), with whom he resided, his grandchildren; Frankie, Nicole, Sarah, Emily, Amber, April, Bobbi, Laura, Alex, Shirley and Jeannette, his 15 great grandchildren, a great great grandchild, his former spouse, Helen (Dolan) Wade, as well as several nieces and nephews.

Bill enjoyed many of the simple things in life; his beloved dog and best friend Charlie, playing bingo and the lottery, yet it was spending time with and supporting his family and beloved grandchildren and great grandchildren who he was most proud of. He had many careers over the years, having retired from Lightening Fasters in Ontario. Bill was a member of the Knights of Columbus Council 9270.

Cremation will take place following prayers and private visitation at Cobb’s Funeral Home and Cremation Center, 330 Whitepine Rd., Riverview (869-2007). Due to the current COVID-19 outbreak, a funeral mass and a celebration of life in both New Brunswick and Ontario will take place at a later date. Donations to the Humane Society of Canada would be appreciated by the family. Online condolences can be expressed at www.cobbsfuneralhome.ca