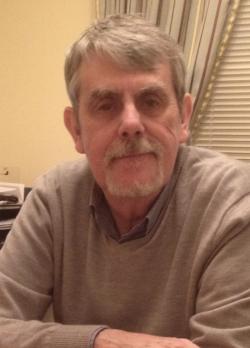 Donald John Patrick Loughnane passed away peacefully in his home in Riverview on Tuesday Feb 16th at the age of 72 with his loving wife Anne-Marie at his side.

Don was born on Dec 13th, 1948 and aside from short stays in Omaha, Nebraska and Kansas City, he lived most of his life in Dartmouth, Nova Scotia where he was raised by his mother Mary and stepfather Charlie, alongside three sisters and four brothers all of whom settled in the south-eastern United States.

In 1970 he met his future wife, Anne-Marie Godin of Bertrand, New Brunswick. They were married in 1972. Throughout 48 years of marriage Don was a loving, dedicated, and supportive husband who until the day he passed away never stopped working tirelessly and dreaming (sometimes wildly) about how to make life better for his wife and family.

Sons Ryan and Adam came in 1976 and 78 and from the drives to early morning hockey practices, a big skateboard ramp he built for them in the backyard at Bloor Drive, all the way to his boys’ flight school and university studies, Don always strove to give his children the best life possible.

For Don, making life good for his family meant an untiring dedication to his work. He represented a number of organizations that had him criss-crossing the Maritimes, throughout Canada and as far away as Japan and Mexico. He was, however, an entrepreneur at heart and it was his independent ventures for which we remember him best. He dreamed big and while health problems meant an early end to his main enterprise Maritime Barter Associates, the far more important accomplishment is how he gifted his children with his strong work ethic and the courage to dream about and to realize the exact life they wanted. For that, he succeeded. Life is good for us, Dad. You succeeded. Thank you for this life you gave all three of us. You are now the only important part that will remain sadly missing. We love you. Rest in peace.

Due to the current Covid 19 restrictions on services, a time to share and celebrate Don’s life will take place at a later date.  Donations made to a charity of the donor’s choice would be appreciated by his family.  His arrangements have been entrusted to Cobb’s Funeral Home and Cremation Center, 330 Whitepine Road, Riverview, NB (869-2007).  Online condolences may be expressed at www.cobbsfuneralhome.ca