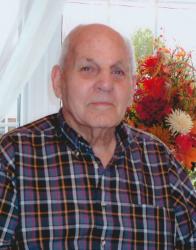 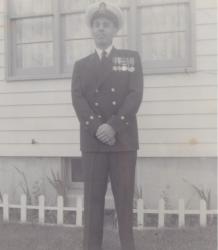 John Joseph Purcell of Riverview passed away peacefully on Monday, June 29, 2015 at his home with his loving family at his side following a courageous battle with cancer. Born in Charlottetown, PEI, he was the son of the late John James Purcell and Ernestine MacEachern.

John received his education at Queen Square All Boys School and was a keen all-around athlete having excelled in hockey and baseball. John was a World War II Veteran. He enlisted in the Royal Canadian Navy in 1940 and served overseas on several ships and shore establishments. Following a 25 year Naval Career, he was employed with Eastern Provincial Airways for five years and a second career as Counsellor with Federal Manpower and Immigration for 20 years.

He was a loving husband to Audrey, his wife and best friend of 62 years. Devoted father to sons, Kevin (Mary) of Hamilton, ON, and Gregory of Riverview; delighted grandfather to his pride and joy, Candace, Breanne and Brennan; and brother to William (Mary) of Toronto, ON. Besides his parents, John was predeceased by his daughter-in-law, Melanie Purcell.

The family will be receiving friends and relatives at Cobb’s Funeral Home and Cremation Center, 330 Whitepine Rd. Riverview, (869-2007) on Thursday from 6:00 to 8:00pm. The Riverview Armed Forces and Veterans Association will hold a memorial service at 5:45pm from the funeral home. A service celebrating John’s life will take place from Cobb’s Funeral Home Memorial Chapel on Friday, July 3, 2015 at 1:00pm with Rev. Dr. Andrew O’Neill officiating. The interment will take place in Alderwood Cemetery. Donation made to The War Amps (1-800-363-4067) or a memorial of the donor’s choice would be greatly appreciated by the family. Online condolences may be expressed at www.cobbsfuneralhome.ca