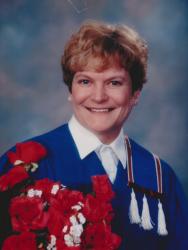 Before her retirement to the Maritimes with her husband, Sharon owned Exclusively Yours Interior Design in Muskoka, ON, and was well known as leader of "the women with power tools" as Stage Set Designer and builder for theater companies in the district. She was also an avid curler (with her name as skip on many Bracebridge Curling Club trophies), and an accomplished sailor with her all-female Georgian Bay crew. She was also a renowned cook, and had several recipes published throughout North America. In Muskoka she won the annual "Golden Noodle" award for her lasagna so many times, she was asked not to enter the friendly competition to give others a chance.

Sharon returned to college in her 40s. She graduated from Georgian College School of Design and Visual Arts in Barrie, ON, in 1993 with honors. It was there that she met her future husband Gerry who taught Art History and Photography at the college. She later studied watercolour and printmaking at the Haliburton Summer School of the Arts.

An only child, she was predeceased by her mother Margaret and adopted father Irvin Leoppky, her best friend Janet Clark and her beloved cat Sunny. Sharon, though suffering from several illnesses including breast cancer and extreme iron deficiency anemia over the past two years, maintained her great love of life. She will be sadly missed by all who knew her.

Arrangements have been entrusted to the care of Cobb’s Funeral Home and Cremation Center, 330 Whitepine Rd. Riverview (869-2007). Cremation has taken place at Sharon’s request with no service or visitation. Donations made in Sharon’s memory may be made to a memorial of the donor’s choice. Online condolences may be expressed at www.cobbsfuneralhome.ca