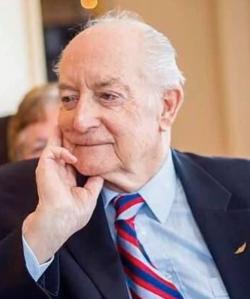 Ev McQuinn, a local aviation and locomotive historian, went Home to be with his Lord and Saviour Jesus Christ on Christmas Eve.

Everett Clifford McQuinn was born in Moncton, NB to Rowena Alfreda (Duffy) and Ira Clifford "Ted" McQuinn.  He was a dedicated, Godly man who was devoted to his Maker and to his family.  He is in Heaven now with his beloved grandson, his parents, and sister.

A long-time resident of Riverview, he grew up in Bridgedale and was always proud of his Albert County heritage.  He spent his idyllic boyhood summers working on the Duffy farm in Lower Coverdale with his Uncle Bill, on the property that has been in the Duffy family since 1827.  He is a descendant of several early families in the area including the lines of Duffy, Jonah, Lutz, Proctor, Peck, Stieff, and Somers.  He was extremely proud of his Irish roots.  Ev was instrumental in the dedication and placement of a marble tombstone on the grave of his great-grandfather, William McQuinn, a Civil War veteran, who is buried in Sackville.  A military re-enactment ceremony was held there in 2004.

Everett was a well-known, well-loved salesman in the area.  His career began with Swift Canadian Company in Newcastle before he was transferred back to Moncton, and it continued with Hub Meat Packers until his retirement.  He won several top salesman achievement awards and was well-known for his honesty and outgoing personality.  It was impossible to go somewhere with Dad without him running into a former customer and friend.

Everett leaves behind his loving, dedicated wife, Noreen (nee Cripps), daughter Judy Seeley (Tom) of Moncton, and son, David (Heather) of Fredericton.  He was always so proud of his children, and they are devastated by his loss.  He was predeceased by his parents, Freda (1979) and Ted (1980), his adored grandson, David Everett C. McQuinn (1995), and his sister Marie (2018).  He was also predeceased by his grandparents, Johiel and Jennie (Jonah) Duffy, and Roy and Minnie (Proctor) McQuinn.  He leaves behind his precious grandchildren, Victoria McQuinn (Ben Dick) of Riverview, and Brittany McEachern (Jordan), Matthew (Josie), William (Madison) McQuinn of Fredericton and his first ever great grandchild Everly Joy McQuinn.  He will be sadly missed by his siblings, Don of Riverview, and Lois Wallace (Kent) of Calgary.

Ev belonged to the Moncton Gospel Hall and previously was a member and deacon of Emmanuel Baptist Church.  He was an executive member of the New Brunswick Chapter of the Canadian Warplanes Heritage Association, a member of the Canadian Aviation Historical Society, the Monarchist League of Canada, and a past member of the Irish Canadian Cultural Association.  He was Director of the Don McClure Historic Aviation Gallery.  He and his longtime friend, Don McClure, worked countless hours to create and assemble an aviation museum in the Greater Moncton International Airport so that a legacy of Moncton’s aviation history would be left for future generations to share.

The family will be receiving relatives and friends at Cobb’s Funeral Home and Cremation Center, 330 Whitepine Road, Riverview (869-2007) on Friday from 2-4 PM, with a service celebrating Ev’s life to take place from the funeral home on Saturday, December  28, 2019 at 11 AM with Pastor Joel Eastwood and Rev. Michael Budd officiating. Please refrain from wearing scented products or giving scented flowers due to family allergies. The interment will take place at Fair Haven Cemetery. Donations in his memory can be made to the Canadian Warplanes Heritage Association (Turnbull Chapter) or a charity of the donor’s choice. Thank you to Dr. Bandyayera for his home visits and exceptional care. Online condolences can be expressed at www.cobbsfuneralhhome.ca