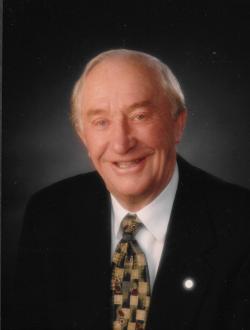 James (Jim) DeWolfe, a longtime resident of Riverview NB, passed away Tuesday at Spencer Memorial Home in Moncton, NB.  He was 93 years old.

Born in Anfield NB, he was the son of William and Lola (Willett) DeWolfe.  He was predeceased by his four sisters, Ida (Briggs), Louise (Lynch), Cora (Davidson), (Maude Stokoe) and his brother, Charles DeWolfe, as well as his wife of  63 years, Mary (Wilmot) DeWolfe of Petitcodiac.  Jim is survived by his children: Anne DeWolfe (Rick), Kelowna BC;  Dr Susan DeWolfe, Toronto ON,  Dr Rob DeWolfe (Michael), Riverview NB and grandsons Mark and Alex Tomaszewicz, Vancouver BC.

Jim began working for the New Brunswick Telephone Company in 1946.  He applied to the company by mail and received a letter back advising him to report for work.  He was employee #272. During his 44 years with NB Tel, he witnessed a revolution in telecommunications, from running phone lines into lumber camps, to cutting trees to create the easement for the microwave towers that crossed the province as part of a project to connect North America, from party lines to rotary dial to fibre optics.  Jim and Mary were active members of the Moncton branch of the Telephone Pioneers of America for many years.

He received the John Ross Matheson Masonic award in 1996 to recognize his volunteer work for the Freemasons.  In 2005 he received the Commemorative Medal for the Queen's Golden Jubilee from Governor General Suave at Rideau Hall.

Jim was an avid gardener, a cyclist, hiker, golfer and skier.  He was a member of St Paul’s United Church in Riverview, the Masonic Lodge Riverview, the Moncton Shriner's Club and the Albert County Historical Society.  He served as a Senior Goodwill Ambassador for the Province of New Brunswick from 1995 to 2011.  He was immensely proud of NB and did not hesitate to book meetings with mayors when he travelled to bring greetings and a bottle of maple syrup. Nothing pleased him more than to meet people, find out where they were from and their family history.

Upon retiring, he organized volunteers for upgrading the Dobson Trail and had great success getting supplies donated by the Town of Riverview and local businesses.  He erected a guide wire to allow access for the visually impaired and hosted an annual campfire breakfast for a CNIB group.  He served as chief storyteller for many kindergarden children and Cub Scout groups at the fire pit.  He was honoured to have a footbridge on the trail named after him.

In 2013, the Town of Riverview created The Jim DeWolfe Community Spirit Award. It is awarded annually to celebrate a Riverview resident for their valued contribution to the community.  Jim was the first recipient.

Jim loved nature, particularly the woods of New Brunswick.  A passionate conservationist, he canoed in the Petitcodiac river and taught his grandsons to fly fish and respect nature.  One of his most enjoyable efforts was, with the help of others, erecting an eagle resting pole on the banks of the Petitcodiac, across from Riverview.  Although in place for many years and moved back twice it is a fitting tribute to Jim that as the river restored itself, it reclaimed the bank and washed the pole away.  Nature knows no bounds and in that spirit his favourite expression being "Keep the Faith"

Due to Covid-19 a service to celebrate his life will take place at a later date.

Donations in memory of Jim are welcome to The Nature Trust of New Brunswick, PO Box 603, Station A, Fredericton, NB E3B 5A6) and the Canadian Cancer Society.  His arrangements have been entrusted to Cobb’s Funeral Home and Cremation Center, 330 Whitepine Road, Riverview (869-2007).

Online condolences may be expressed at www.cobbsfuneralhome.ca