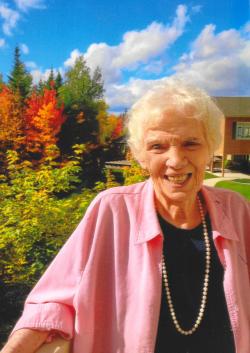 Gwendolyn Vallieres of Dieppe passed away on April 28, 2021 at the Auberge du Soleil.  Born in North Sydney she was the daughter of the late Gerald C. and Gladys (Dowling) Scott.

She was formerly employed as a secretary.

Gwendolyn will be dearly missed by her sons David (Sheila) Kieran, Robert (Hélène) Kieran and Michael Kieran, six grandchildren and three great grandchildren.  Aside from her parents, she was predeceased by her husband Raymond Vallieres (2006), two sisters and three brothers.

Cremation has taken place at Cobb’s Funeral Home and Cremation Services, 330 Whitepine Road, Riverview (869-2007).  Interment will take place in Rideau Cemetery, Dollard-des Ormeaux, PQ at a later date.  Donations made to a charity of choice would be appreciated by her family.  Online condolences may be expressed at www.cobbsfuneralhome.ca