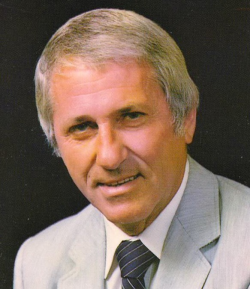 Jerry was born along with his twin brother Brian in 1928 to parents Augustus and Dora (Doody) Carreau. He was the namesake of his Uncle Gerald, who passed away in the Halifax Explosion.

Sadly, Jerry passed away in the early morning hours of January 6, 2022, at the age of 93 with family by his side.  We are grateful his passing was gentle and peaceful.

Jerry grew up in Halifax and began his storied career at 16 years old with CNR, eventually moving up the ladder. He was transferred to Moncton in 1962 where his family, including 5 children, settled in Riverview.  His 6th child was born a year later - the only New Brunswicker in the family.

Upon his transfer, he was given a beautiful floor lamp which went with him to all the bars in Halifax, celebrating his promotion. It eventually came with him on the train bound for Moncton.  We still have that lamp and oh the stories it could tell!

He was always one to enjoy a good time. The 500 block of Yale Avenue was where it was ‘happening’.  From water fights with all the neighbours – one such water fight required him to repaint one side of the house, because he didn’t let it dry before he turned the hose on his neighbours; to carpeting the roof of a neighbour’s house ‘just because it was funny’; to picnics at Miller Park, complete with a TV – because who wouldn’t want a TV at a picnic?

Jerry was also an avid golfer, having a membership with the Moncton Golf Club for close to 50 years – golfing right up to the age of 90.

He married Judith (Cousins) in 1988, the same year he retired from CNR. Together they made many cherished memories including trips to Florida and Myrtle Beach in the winters, where one year they had the opportunity to attend the Masters in Augusta, Georgia, a dream come true for both of them.  Their European Cruise, taken in his early 80’s, was the highlight of their travels.

He leaves to mourn his wife of 34 years, Judith.  His children Michael (Silvana) of St. Albert, AB; Gregory of Kelowna, BC; Cathy Carreau of Halifax, NS; Annette (Bob) Miller of Riverview, NB and Angela (John) McLaughlin also of Riverview and son in law Andy Shaw, BC. Step-children Michael McNeil (Jeanne) of Riverview, NB; Shari McNeil of Rothesay, NB and Roxanne McNeil (Dev Paul) of Kanata, ON; twin brother Brian of Moncton and favourite niece Julie (Tony) Bond of Moncton, as well several nieces and nephews.  He also leaves to mourn his four grandchildren:  Noah and Zachary of St. Albert, AB and Duncan and Jeffrey Shaw of BC, as well as four step-grandchildren Megan, Sydney, Brett and Brandon and many great friends.

The family would like to say a very special thank you to the nurses at the Moncton Hospital on 5100, who treated him like a rock star.  He so very much appreciated all of you, as did his family.

This is not good-bye forever, it’s bye for now…

At his request there will be no funeral. However, family will be receiving relatives and friends at Cobb’s Funeral Home and Cremation Center at 330 Whitepine Rd., Riverview, NB (869-2007) on Tuesday, January 11, 2022 from 2:00 to 4:00 pm and 6:00 pm to 8:00 pm.   Proof of double vaccination and a photo ID will be required upon entering the funeral home.  Interment will take place at Alderwood Cemetery at a later date.  Donations can be made in Jerry’s memory to the Friends of the Moncton Hospital.