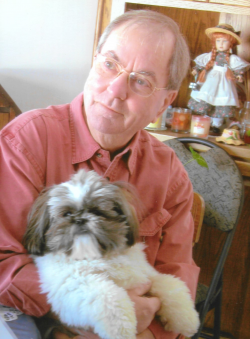 It is with a heavy heart and deep appreciation of a life well-lived, that we announce the passing of Edgar BLAINE Steeves of Hillsborough. Blaine passed away suddenly at home on January 12, 2022. Born in Hillsborough, he was the son of the late Gordon D. and Elva (Crossman) Steeves. Besides his parents, he is predeceased by his brother, Glendon Steeves.

Blaine had a full and diverse career. He served his country with the Royal Canadian Air Force for 15 years. In the early 80’s he became the Maritime Sales Manager for Stanley Tools, traveling around Atlantic Canada. He eventually retired from sales with Amerock Hardware in 1993. It was then that he fulfilled his calling and true passion; entering into ministry and becoming a Pastor. He along with his wife Cynthia faithfully served as Clergy for Shantyman International in their prison and ports outreach. Blaine pastored churches in Canaan Station, Alma, and Weldon, New Brunswick. He eventually retired from pastoring in 2019 due to failing health. Blaine enjoyed four-wheeling, playing his guitar, and time spent with his grandchildren. He loved and deeply missed his little dog Maggie.

Left to cherish his memory is his beloved wife of 58 years, Cynthia(Sullivan)Steeves, daughters Susan (Anthony Reeder) and Sharon (late Anthony Owings), sisters Myrna Stevens and Carol Steeves-Wilson, grandchildren Matthew, Freya, and Emily, as well as several nieces and nephews. Donations in his memory may be made to Weldon Baptist Church or the charity of the donor's choice.

Due to current Covid 19 restrictions, a visitation and service will take place at a later date at Cobb’s Funeral Home and Cremation Centre, 330 Whitepine Road, Riverview (869-2007) to be announced.