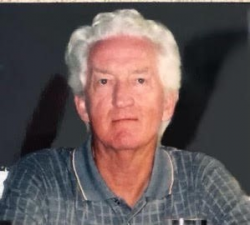 At the conclusion of a wonderful lifetime of 87 years, including 63 years with his beloved wife, Bernard Goobie of Riverview passed away peacefully in hospital on Tuesday, January 11, 2022.  His family members are particularly grateful to Bill, his eldest son, who spent much of his time in recent months caring for his Dad.

Born in St. John’s, NL, he was the son of the late William Bernard and Jean Hamilton (Mathieson) Goobie.  He was a loving husband to Florence ("Flo") and a caring and devoted father to his three children.  Bern or "Bernie" was an active member of the local community and the neighbourhood where he and Florence lived since 1970.  Bern was an avid golfer at the Moncton Golf and Country Club for 50 years, where he was honored to serve as Club Captain and enjoyed a great relationship with all the members.  He also attained a significant level of mastery at Bridge and in his early life was a very successful athlete in many sports, including Hockey, Rowing and Soccer.   After moving to Riverview, Bern coached minor hockey for many years.  Bern also had a successful career with the Canadian National Railway, originally as an Electrician and later as a Shop Foreman.

Predeceased by his beloved Florence, "Poppy" will always be remembered by his Daughter, Jill Harvey (Robin), Sons, Bill and Scott (Verina), his Brother, Bill (Patricia), Grandchildren, Ryan, Adam, Sabrina, Jason, Nathan, Robert and Meghan and great grandchildren, Raelyn, Grace, Lucas, Hunter, Leah, and Tyson.  Besides his parents he was predeceased by a dear Sister, Gertrude.

A celebration of Bernard’s life for his friends and family will be held later due to the current restrictions on gatherings.  The gathering will also be available to join on-line via www.cobbsfuneralhome.ca.  Donations to The Friends of The Moncton Hospital Foundation would be appreciated by the family.  The arrangements are entrusted to Cobb’s Funeral Home and Cremation Center, 330 Whitepine Road, Riverview (869-2007).  Online condolences can be shared at www.cobbsfuneralhome.ca