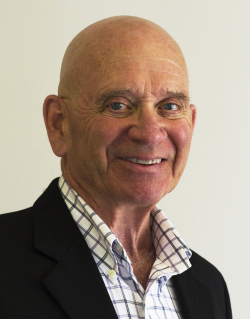 John Thomas Reath of Moncton NB, passed quietly from complications of COVID on February 4, 2022.  He was born in December 1945 in St. Thomas Ontario to John "Jack" Reath and Gwendolyn "Gwen" Reath (nee Waller) whom both pre-deceased him.  John was also pre-deceased by his second wife, Hélèna Reath (nee Bourque). John is survived by his 3 brothers; James, Peter and Christopher and his sister Jane.

John grew up in St. Thomas Ontario where he attended Catholic school, was an altar boy and played basketball.  He tried hard to learn piano, but admitted he was likely more distracted by the idea of slipping off to go fishing.  This love for fishing is something that he maintained throughout his life.  His desire to learn piano came back late in life, but he once again was distracted, this time by learning to SCUBA dive. As a result, he finally admitted the piano was something his younger brother Peter would always be better at.

John left home early in life, striking out for the burgeoning industrial markets in northern Alberta.  He spent time working as a geophysical technician and building snowsheds over the railways with his brother Peter.  As he described it, "it was a time when he could drop explosives into drill holes, wait for the boom and pretend to find things underground."  While extending his education at the Northern Alberta Institute of Technology in the late 60’s John had two momentous events.  First was making the decision to move to the East Coast and join the Canadian Navy, following his brother Jim and secondly he met his first wife, Sandra.  Both his basic training and wedding occurred in late 1967, followed by the birth of Jeffrey in 1968.

In the Navy, John sailed on five surface ships including the HMCS Iroquois, HMCS Huron and HMCS Algonquin.  His trade as Surface Weapons Technologist was a challenge he enjoyed, but seasickness always lurked in the background.  John made many lifelong friends in the Navy and was proud of his service to the country.  In 1974, his second son, Jason, was born.  Following this new addition to the family, John decided to retire from the Navy and return to Alberta seeking a career in the pipeline construction field.  While on a trip to Calgary, investigating possible positions, his brother-in-law approached him with a radical idea.  As John describes it, he was asked: "Do you want to eat your lunch out of a box, or off a plate?"  Instead of embarking on a new job in the field, John joined his brother-in-law as an Insurance Agent.

In 1976, John packed his wife and two boys into the Plymouth Fury and left Lower Sackville, NS setting out for Calgary.  John joined SunLife Assurance as a new agent, learned about sales and client services and spent his leisure time fishing the elusive rainbow trout. After two years, John’s father-in-law offered him an assistant branch manager position back in New Brunswick.  In 1978 John once again set out across country with his wife and two boys in tow, heading first to Fredericton for 9 months and then finally to Riverview.

John spent the next 17 years working for SunLife as an agent, assistant manager, sub-branch manager and again as an agent.  His son Jeffrey joined him in 1993 and they moved onto become brokers in 1995 with relationships at various insurance companies and brokerages.  John excelled at developing close relationships with his clients, calling many of them friends.  John continued to work as an insurance broker right up to his last day before the sudden onset of his illness in 2017.

Throughout his professional career, John engaged in many long-term projects and groups in which he took tremendous pride.  John was an instructor and mentor with the local chapter of the Life Underwriters Association of Canada, worked with the Greater Moncton Volunteer Centre, aided in establishing the Greater Moncton Estate Planning Council and was a Charter member of the Moncton West & Riverview Rotary Club, which twice recognized his dedication and service with Paul Harris Awards.

In his personal life, John was active in the church at St. James Anglican, volunteered as a Cub Scout Leader and of course escaped for fishing trips whenever he could.  One of his most cherished memories was when two of his brothers, Peter and Chris, joined him for a salmon fishing trip that resulted in a full quota.  John never missed an opportunity to cheer on Jeffrey and Jason in their activities and was a fixture on the football stick crew, brought fresh cut oranges out at halftime and made 80’s style team programs to pass out to other parents. John carried this cheerful support to all his grandchildren’s activities whether it was on the field, at the dance studio, on the cadet parade square, at the rink, or in the gym.

Although John and Sandra divorced in 1988, they maintained a cordial relationship throughout their remaining years.  John married Hélèna in 1994 and was welcomed into her extended family.  This included Hélèna’s son Charles with whom John formed a warm relationship.

During the 7 years they were together prior to Hélèna’s passing in 2002, they welcomed two grandchildren, Jacob and Caleb, developed a passion for skiing, travelled Europe, spent countless evenings camping on the beach and took trips to the orchard.  John insisted on living for the moment and believed in family time well spent.  Each summer there were large, multi-family BBQs, croquet tournaments and impromptu fashion shows for the young ones in attendance.  It was during these times that John was in his element, always welcoming anyone who wanted to have fun and cooking all day long.  But his particular favourite time was Sunday brunch where he would make a multitude of different flavours of pancakes. John and Hélèna were always ready to open their home with kindness whether to family, strangers stranded during 9/11, Rotary exchange students, or someone needing a place to stay while studying at Université de Moncton.

After losing Hélèna too soon, John threw himself into living his best life.  He travelled to South Africa on a Rotary program for 6 weeks, learned to SCUBA Dive and travelled to experience different locales.  He welcomed four more grandchildren over the early 2000’s and was delighted to also be able to include Jason’s extended family as it grew.  John never stopped learning and continued to be a valuable asset to his clients.

In 2017 John developed a rapid developing form of Dementia.  He entered into long term care facilities where ultimately he declined and recently contracted COVID.  It was this terrible disease that ultimately defeated his strong desire to live, laugh and love.  It is with sadness that we say good bye to a man, a father, a Pépère, a friend and a mentor.  However, it is also with pride that we recall a life well lived.

Dad was a person that truly believed you could learn anything, if you tried hard enough. Except perhaps calculus, which he considered to be beyond comprehension.  He had a computer before it was commonplace, he loved to contemplate star charts and astrology and his gardens were his personal oasis.  A quiet sit in the woods with a sip of scotch and backwoods cigar was his idea of being as close to paradise as he could get.  He was a jogger, swimmer, walker and squash player.  All in all, he was a good person, and that is all he ever wanted to be.

There will be no visitation or funeral services until a spring internment, when he will be laid to rest beside Hélèna.  Should one wish to commemorate John’s life, he would be the first to say "Take a moment and tell someone you love them. Don’t waste your time or money on me." If you wish to support a charity, please choose one close to your heart. John was always ready to canvas and raise money for the Canadian Cancer Society, Heart and Stroke Foundation as well as various Rotary projects.

The family would like to thank the staff at the Kenneth E. Spencer Memorial Home for their tireless work and effort.  They would also like to thank friends and family that have checked in on John over the years, especially Diane and Rick for their many visits with Dad.  The family also sincerely appreciates all the well wishes expressed through the many and varied means over the days following John’s passing.