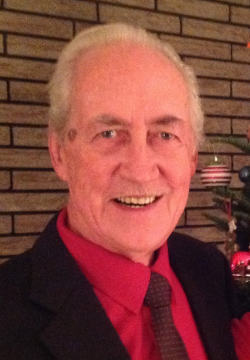 A love story that began in 1965 and will continue on to eternity because of the love between two people and the value of family that was instilled into their children and grandchildren and will no doubt be passed down for centuries to come.

Our hearts have all been broken into a million pieces and our lives forever changed with the passing of Joe on Sunday, May 29th after a long-fought battle with cancer. He fought with every bit of strength, but at the end he could do no more- the fight was over.

Joe was born January 31, 1945 in Moncton, NB to Dougald and Nora (Dyer) MacFarlane. He was the oldest of eight children and did a wonderful job being the best big brother possible. At the age of one, his family moved back to their home in Williams Point - known to any true Pointer as "God’s Country".

Joe moved to Halifax in 1965 to go to work with CNR. Lucky for Anita, he moved right next door and it was love at first sight for her. We were married in 1972 and transferred between Halifax and Moncton a couple of times. Joe continued to work for CN Express for 25 years until it was privatized and transferred to Route Canada. He then went to work for Clarke Transport where he eventually retired from. He was a true dedicated employee and worked hard to provide for his family.

Joe’s family was his true love. There was nothing more important than get togethers with our children, grandchildren, siblings, nieces, and nephews, as well as the extended family. There was nothing like a trip to the Point with the MacFarlane clan where there were no shortages of adventures over the years. Whether it was over a cup of tea with his parents back in the days to walks around the farm, visiting cousins or a good old all-night party, the memories are treasures we will carry in our hearts forever. The Murphy family was as much a part of the love Joe had for his immediate family because to him, we were all one big family. He loved his trips to Halifax and getting together with everyone whether it was his in-laws or their families.

A close tie to his one true love was antique cars. Whether we were out for a drive enjoying the day or possibly heading out on a trip, if Joe spotted an old car in someone’s driveway, he wasn’t passing by. He had to pull into the yard, check out the car and find out who owned it. Luckily, people were quite receptive of him. I guess that’s a quality antique car owners have. Joe was a member of the NBAAC, The Ford Country Club and NB British Motoring Association. All of his car club friends were considered his second family and he truly enjoyed his morning coffee get together over the years with many of them. Joes love for country music was instilled at a young age growing up on the farm and whether he was sitting around at home or going for a drive, there was always country music playing.

From a very young age, Joe loved playing ball and it was only natural that he coached his children’s ball teams when they were young. Along with ball, Joe loved to curl. We took up curling when we moved to Moncton and enjoyed so many wonderful times meeting new friends, competing at local clubs or going away on a bonspiel. So many memorable times.

Joe loved to travel, and whether it was a trip to NS to see family or flying overseas to see the beauty of so many countries, travel was a big part of our lives. Nashville, Mexico, Cuba, New York, too many places to mention but we loved to be on the road. Trips to Montreal when the children were young to enjoy LaRonde or Toronto to take in a Blue Jays game was so much fun. And of course there were numerous trips to the USA - whether just to Bangor shopping, the White Mountains for adventure or Boston for a hockey game, our travelling times as a family were truly the greatest.

Besides his parents Dougald and Nora, Joe was predeceased by his brother Doug (2013), and his daughter Krista (1974). He will forever be in the hearts of his wife of 49 years, Anita (Murphy), children Kimberley (Izzy) Gudmundson of Penticton, BC, Kerry (Chris) MacLeod of Riverview, NB and Craig (Jennifer) MacFarlane of Banff, AB. Seven beautiful grandchildren will be left with memories of grampy to cherish forever: Kristen, Jade, and Aiden Gudmundson, Owen, Ryan, and Kate MacLeod, and Noah MacFarlane. Joe also leaves behind his siblings Lillian (late Mike) Power, Mary Lou MacFarlane, Kenny (Bernadette) MacFarlane, Donnie (Brenda) MacFarlane all of William’s Point, Carol (Raymond) DeCoste of Pomquet and Dorothy (late Lenny) Benoit of New Glasgow. He will also be missed by his in-laws Bill (Marlene) Murphy, Susan (late Brian) Gough and Doug (Gail) all of Halifax. He was predeceased by his sister-in-law Carmie MacFarlane (2020).

A special thank you to Dr. Heather Kelly and the Extra Mural team for all the support over the past few months- I couldn’t have gotten through it without you. Thank you also to everyone involved in Joe’s care over the past five years at both the Dr. Sheldon H. Rubin Oncology Clinic and the George Dumont Hospital.

Respecting his wishes, cremation has taken place at Cobb’s Funeral Home and Cremation Center, 330 Whitepine Rd, Riverview (869-2007). A service to celebrate his life will be held on Wednesday, June 1st, 2022 at 11am with Father Phil Mulligan presiding. For those unable to attend, the service will be live-streamed and recorded. Burial will be in the Gate of Heaven Cemetery in Halifax, NS where Joe will be laid to rest with his daughter Krista.

No flowers by request. Donations may be made to The Ronald McDonald House, Halifax, NS. To view the service please click here.