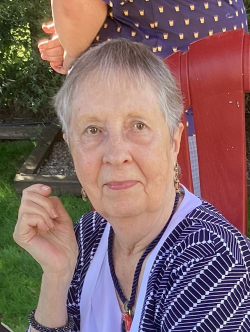 We are saddened to announce that Marlene Clarke, most recently of Riverview , NB. passed away on September 19, 2022 at The Moncton Hospital.  Born in Chatham, Ontario, she was the daughter of the late Auburn and Elisabeth Wright of Erin, ON

While initially residing in Tilbury,ON , Marlene’s formative years were spent in Erin ,ON where she graduated high school . Marlene then went on to attend Alma College in St. Thomas, ON and London Normal School where she obtained her teaching certificate.

In 1992, after many years of summer courses and night courses Marlene earned her Bachelor of Arts;B.Ed. from York University. Marlene was a long-time elementary school teacher , first at Torrence School, Guelph,ON ,then with the Etobicoke Board of Education for 33 years . Marlene taught at various public  schools in Etobicoke during this period including Highfield, Albion Gardens, Westmount and Lambton-Kingsway.

After a lengthy retirement Marlene only recently moved to Riverview, NB so that she could be closer to family. During retirement Marlene enjoyed very much her time spent at Tecumseh Pines in Tottenham, ON and at Chestnut Manor in Schomberg, ON. The friendships she had at both meant a lot to her.

She will be dearly missed by her son Steve Clarke (Kari), brother Wallace, grandchildren Jonathan (Kristi), Andrew (Opal), and Stephanie, great-grandson Jack, nephews Tim and Tony Irwin, and brother-in-law Bob Schellenberg. Besides her parents, she was predeceased by her sisters Denise Irwin and Lenita Schellenberg.