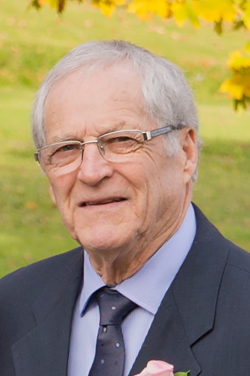 Wallace "Wally" Whitman Fisher, of Riverview NB, passed away peacefully at The Moncton Hospital on November 28, 2022. Born in Brookfield NS, he was the son of the late Stanley and Gladys (Power) Fisher.

Wally worked for many years with CNR and Via Rail, both in Halifax NS and Moncton NB. He grew up in Brookfield NS and was very active in playing hockey and softball for the Brookfield Elks. He enjoyed wintering in Florida, salmon fishing on the Miramichi River, playing golf, and especially enjoyed spending time at the cottage in McKees Mills. He was very handy and could build or fix almost anything. He was a wonderful husband, father, brother, grandfather, great grandfather, and friend, and made a positive contribution to the lives of many.

As per Wally’s wishes cremation has taken place with a family graveside to take place in Alderwood Cemetery at a later date. Arrangements are entrusted to Cobb’s Funeral Home and Cremation Center, 330 Whitepine Rd. Riverview (869-2007)

In lieu of flowers, donations may be made to the SPCA, Friends of the Moncton Hospital, or a charity of the donor’s choice.